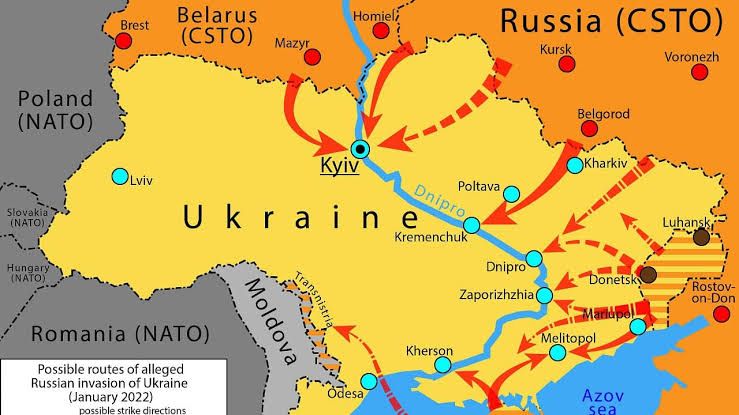 1- In what is termed as largest military campaign since World War II , Russia invaded Ukraine on 24 February 2022. The attack marked a steep escalation of the Russo- Ukrainian War which began in 2014, in which Russia had annexed Crimea and Russian backed separatists seized part of the south- eastern Donbas region of Ukraine.In 2021,Russia began a large military build up along its border with Ukraine amassing up to 190,000 troops with tanks and arsenal .On 21 February 2022, Russia recognized the Donetsk People’s Republic and the Luhansk People’s Republic, two self proclaimed states in Donbas controlled by pro- Russian elements. The invasion began on the morning of 24 February when Russian President Putin announced a special military operations to” demilitarize and denazify” Ukraine. In the ensuing attacks massive missiles and air strikes were launched all across Ukraine , including its capital Kyiv, followed by large scale ground invasion from multiple directions . In response Ukrainian President Zelensky enacted martial law and general mobilization while conscripting all male Ukrainian citizens in age bracket 16-60 for military service.

Ukraine, part two. Impact of the Russo-Ukrainian War on the Middle East