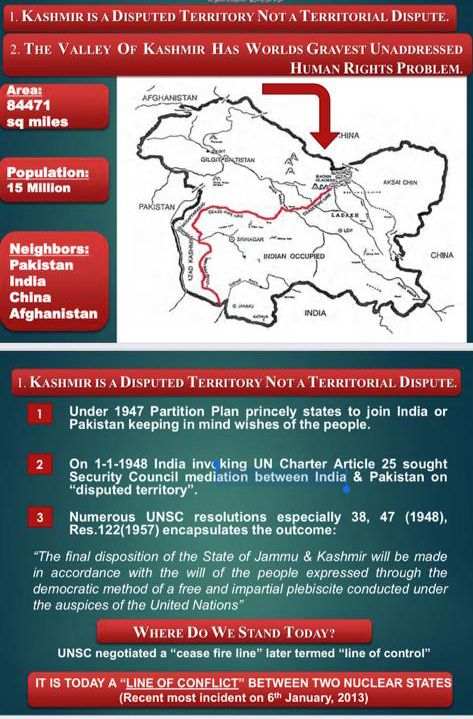 Kashmir, also termed as the, ‘Heaven on Earth’, is an 85,806 square – miles valley between the snowcapped Himalaya and Karakoram Mountain ranges. The Kashmir conflict is the oldest, unresolved international conflict and is both a territorial and ideological issue between India and Pakistan with China playing a third –party role. The dispute started,following the partition of Indian sub-continent in August 1947, after the forced annexation of the princely state of Jammu and Kashmir, by India. This abnegation was the violation of the British instrument of accession of India, accepted by both Muslims and Hindus which stipulated that Muslim majority areas will form part of Pakistan, while Hindu dominance states will form part of India. Pre-partition state of Kashmir had 87 percent of Muslim population. The dispute spread over more than seven decades, has resulted in three wars between nuclear neighbors India and Pakistan and several other skirmishes. India controls over 55% of the land area of the region that includes Jammu, the Kashmir Valley, most of Ladakh, The Siachen Glacier and 70 % of its population; Pakistan controls approximately 35 % of the land area that includes Azad Kashmir, Gilgit- Baltistan and part of Siachen; China controls the remaining 20 % of the land that includes Aksai Chin region and mostly uninhibited Trans Karakoram tract.

After the partition of India, and a rebellion in western Kashmir against Indian occupation, Pakistani tribes and military freed the areas of Kashmir state, which now form part of Pakistan. The resulting war between India and Pakistan ended with a UN mediated ceasefire along a line that was eventually named the Line of Control (LOC). This remains a cease fire line even today. The UN Security Council Resolution passed on 21st April 1948 and eleven more UN resolutions, last being passed in January 1957, laid down that,” Accession of Jammu and Kashmir to India or Pakistan should be decided through the democratic method of a free and impartial plebiscite”. Despite tabling and accepting these UN Resolutions, India continues to defy the provision of calling for a plebiscite denying eight million people of Kashmir their right of self-determination. Disillusioned by Indian use of force against un armed Kashmiris, including women and children, many Kashmiri resistance movements emerged seeking a merger with Pakistan. These indigenous movements for the freedom struggle against the occupation forces of India, assumed uncontrollable dimension in 1989. Despite strong Indian military presence, the struggle of Kashmiri people has continued for more than three decades now without any signs of receding. Amnesty International, UN Human Right and international human watch organizations have severely criticized the Indian government for the grave violations of human rights and killing of Kashmiris in fake encounters. However, India refuses to provide access to UN Observers or Human Rights bodies to visit Jammu & Kashmir for fact finding.

In August 2019, Indian government of extreme rightist Bharatiya Janata  Party (BJP)repelled the Articles 370 and 95 A of the Indian Constitution which gave Indian Occupied Jammu & Kashmir (IOJ&K) a special status and non-purchase of property by any outsiders. This move was enacted in accordance with the well-designed plan to recreate ground realities, change the demographic base by settling non-Muslims for Indianization of the disputed territory. After the down gradation of the constitutional status of J&K, India has introduced 200 laws to reshape the occupational state. A major change has been in the domicile law paving way for the settlement of more than two million outsider to change the population ratio to Hindus. The BJP government since coming into power in 2014 refuses to enter into a dialogue either with Pakistan or with the Kashmiri parties struggling for the separation of J&K from Indian subjugation. In the past all bilateral negotiations between India and Pakistan on the unresolved issues of Kashmir have failed to yield any meaningful results. In 2007 President Musharraf of Pakistan and Indian Prime Minister Manmohan Singh, after years of back-channel diplomacy, came near formalizing a peace agreement on the status of Kashmir but lawyers’ unrest in Pakistan and the weakening of the government, shelved the agreement. Successive US Presidents have declared Kashmir as a serious flash point between two nuclear states in South Asia and even offered a third-party mediation, but India refuses any indulgence by a third party.

India –China standoff in Ladakh in 2020 was also a consequence of Indian abrogation of Special status of J&K. Chinese capture of more than 900 square kilometers of Indian territory has placed China in a position to severe the base of Indian troops in Siachen Glacier and deny any threat to Gilgit Baltistan. It has also given a strategic advantage to Pakistan. India-China conflict has further brought the dispute to international limelight and a renewed pressure on India to resolve this long outstanding dispute. There are many similarities between the Kashmir and Palestine conflicts. Both are the oldest UN legislated resolutions, calling for the rights of self-determination of the people, occupied by neighboring states and where innocent civilians are the victims. Both India and Israel follow the policies of the use of brute force, constitutional amendments for land grabbing and illegal settlements to change demographic profiles. In both Palestine and Kashmir, now the third generation of populace is waging the freedom movement, ‘Intifada’ against the occupation forces. Together, these two conflicts remain as the unresolved issues of the Muslim Ummah.

BIRTH OF A NATION ISLAMIC REPUBLIC OF PAKISTAN