The Iraqi arena after the election results ….!

The Iraqi street is witnessing today in the various governorates of the country a state of turmoil. Despite the end of the elections and voting operations after many people and forces bet on the failure of the electoral process and the exclusion of the possibility of holding early elections, what happened was not expected.

In short, these elections are no different from the previous ones in the past years in terms of procedure, transparency, credibility and integrity, and the matter is known to the entire Iraqi people.

But what happened yesterday came as a great shock to some, as the statements began to warn that one component would enter into conflict with itself.

After the announcement of the election results, which witnessed a significant decline of a number of political entities and forces, and the advancement of other entities, this progress was not expected, and new entities entered the political process as well. In addition to the success of a good number of independent candidates, the electoral surprises began as the Sadrist movement obtained A large number of parliament seats, which will enable it to form a government with a majority in the event of forming a coalition that includes the current and one or two other entities from the entities that have obtained a good number of seats. As for the reality and what is happening on the scene currently, we see an escalation in the media and meetings of political blocs that reject the election results. She calls it fake and accuses parties of stealing their votes. It is not hidden from the reader that votes were bought, as is the case with all previous electoral processes, and the manipulation of electoral centers by political parties, which took place in the various governorates of the country, where we saw in many video clips blackmail operations for a group of clan mobilization to vote for a particular person.

We have already mentioned in a study of the Zulfikar Center before the elections
In it, we talked about the current scenario, which predicts the outbreak of a conflict between the political blocs and their armed arms on the ground.
One of the strange paradoxes in this electoral process is the participation rate, which according to many independent observers, did not exceed 17%, the figure, which the Commission, in turn, said was incorrect, and that the percentage amounted to 49%.

The laughable and crying thing is really as if the Commission was bragging about this shameful percentage. The matter went beyond this limit, as the Commission announced certain results on its website and then withdrew them.
and produce other results.
It should be noted here that the center does not adopt the result of a certain bloc, neither support nor opposition, but the matter has become a kind of fantasy, a reality that cannot be found in another country.

We saw statements from the leader of the Sadrist movement, who has the largest number of votes, a new statement that we did not know before, in which he used strong phrases addressed to the entities at home and to the surrounding regional countries abroad, and following the announcement, we also heard many statements by militia leaders, most notably the statement that threatened to burn the headquarters of the movement thoracic;
On the other hand, many candidates presented their evidence on tapes that the announced voting rates against them are not real and that the actual number is much more than that, which may force the commission to recount manually.

In conclusion, the coming days are full of surprises and carry a lot in this regard. 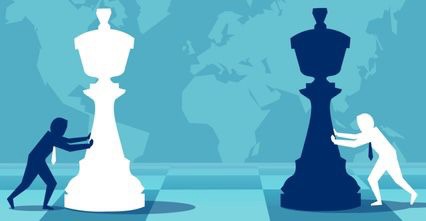