Iraq … the region and the new colonialism

– It has become a reality that there is an international conflict on our region, especially after the Corona pandemic
that struck the economies of the major countries and because of which they started again searching for wealth and seizing it, with nothing in front of it but the countries of the Middle East, and there are reasons that motivated the major colonial countries to move towards Riches again which is: –
– Regional rise (Turkish and Iranian) and expansion in the region of Arab wealth, which made America impose the strongest siege and sanctions in its history against Iran in an attempt to stop it and force it to retreat to the interior of Iran! – The strong Chinese rise towards world leadership after the Corona pandemic, which the United States addressed with demonization, sanctions, psychological and media warfare, and entering into the Cold War against it and following it up to block the most of its agreements in the Middle East region. – The Russian lead into accomplishment of the Russian interests in Syria and regions in the Middle East made the United States in a state of confusion, and made the Europeans, especially the French and British, in a state of turmoil from the Russians, especially since the Russians blew up French dreams in Syria, these countries became annoyed because of Russia. Especially When Russia stood by China in the process of China to lead the world! France decided to land in Lebanon through the exploitation of the (Beirut Port) explosion, that is, France used this catastrophic explosion that claimed more than 138 martyrs, 5,000 wounded, material losses estimated at $ 15 billion and displaced thousands of citizens who lost their homes, jobs and future so that French President Macron went to place the France share after the Corona pandemic according to the division of the new world … – Here, many question marks arise about the method and timing of the French investment in the tragedy of Lebanon, especially and since the French fifth column in Lebanon cheered publically for the French president, and collected a list containing the signatures of thousands of Lebanese demanding the return of the French mandate where it was handed over to the French accompanying the president, by this move it seems that the minister succeeded. Earlier the French Foreign Ministry, upon its visit to Lebanon last July, referred to the explosion of Lebanon if the politicians did not rush to pull it out, all of this should be taken into consideration by investigation committees of the incident! – It was hysteric for the Turkish side regarding the Beirut bombing, followed by Iranian hysteria about Lebanon, and the reason is that Turkey lost Lebanon in favor of its archenemy France, which made Saudi Arabia and the UAE gloat over Turkey, as well as Cyprus, Greece, Italy, Egypt and even Algeria, hating their role in Libya! Iran has become afraid of the weight, influence and power of its allies in Lebanon, especially since the coming of France with this strength and clarity means that there are international forces coming to Lebanon, and this is what happened later which made Iran out of comfort …. Also there is Iranian annoyance over the disrupting and complicating of its strategic goal to reach to the sea outlet on the Mediterranean, which was blown up by the Beirut Port explosion! – Italy, with Greek and European support, began to slide towards Libya, meaning the slide towards its old legacy, it will achieve this especially if Britain became its allied, which is considered to have historical influence in Libya, the Britain’s goal in this case will be Russia in Libya for what Britain bears of historical hatred for Russia! But the Italian slide towards Libya will either be through a lightning war coming in Libya, or through an explosion similar to the explosion of the Beirut port in Libya, hastening the coming of the Italians to the ground, as the coming of French, led by their President Macron, landed in Lebanon!. – let us go back to Iraq, there are those who are planning “states and groups” to destroy and ignite Iraq by fueling a Shii’ie-Shii’ie conflict, in order to have repercussions that will sweep away very important religious and political symbols for their audience who will not stay silent and will be dangerous chaos and may lead to a dangerous Shiite-Shiite conflict .. And then you will directly see Britain on its own in Iraq, where Baghdad, Najaf, and Basra are, and at that time Iraq will enter a new history formed by countries within the return of colonial countries to their old legacies, including Iraq … – America does not collapse easily, but it has weakened and this will continue for many reasons, regarding the Iraqi file it has completely lost confidence in the Iraqi Shiites, and failed to understand and tame them. And the best Shiite agents then do not trust the American more than 50%. Therefore, the Shiites only understand Britain. That is why Washington returned to the friendship with the Baathists and with Iraqi parties that were fighting the American forces under the banner of the resistance to become their ally.
Writer August 22, 2020
security studies
Iraq and politics Iraq and the region The politics in iraq

The change in the Iraqi situation after assigning Mustafa Al-Kazemi 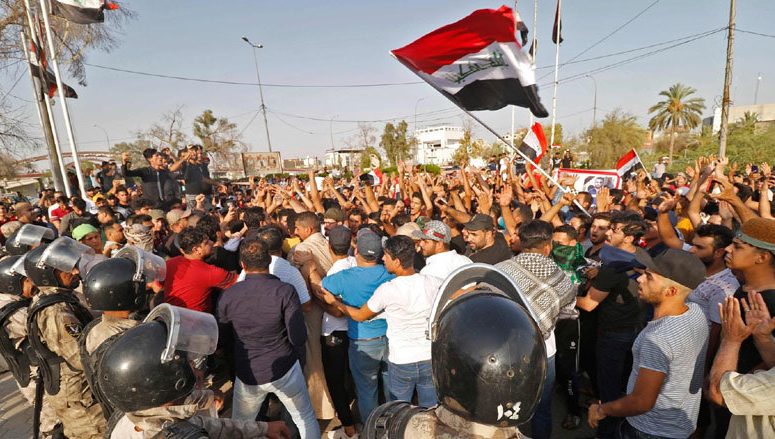